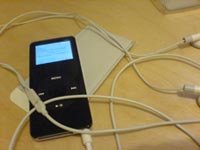 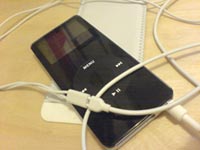 Uh-oh, I think I might own an ipod. Not sure how that one happened… It might have something to do with mentioning to my parents that I would like one for Christmas. It is unbelieveably shiny and so small!

I opted for a (ninja) black 4 Gb Nano, mainly for the ease of carrying and for a decent amount of space. I don’t really want to carry around my whole music collection, but then I don’t want to have to rotate albums every day or something (like with a shuffle). As a Windows user I’m allergic to iTunes so I ditched that at the earliest convenience and I’m using mlipod for winamp which is aces-cool.

The screen is great and the scroll wheel is easy to use once you get the hang of it. The UI is the usual Apple slickness and makes navigating around really easy. I haven’t tried any video on it, but the photo album is vaguely useful and has pretty slideshows. It’s usability is limited on a screen so small though. The whole Nano is incredibly easy to scratch, I have a few minor ones after only a week so I’ve ordered a case for it which should help a bit.

More on my adventures in Apple-land in time.